Is an important URL for changing the resolution on a DS18B20 via the Raspberry PI. Pay attention to the note re RPi2 and changing the code.

I also changed the GPIO pin to 4 to save rewiring but disabled the config.txt option for 1wire and disabled the gpio and thrm in /etc/modules just in case while running this program.

It seems to be working, now have the resolution set at 12bits on a new sensor I received that was working in .5c steps. 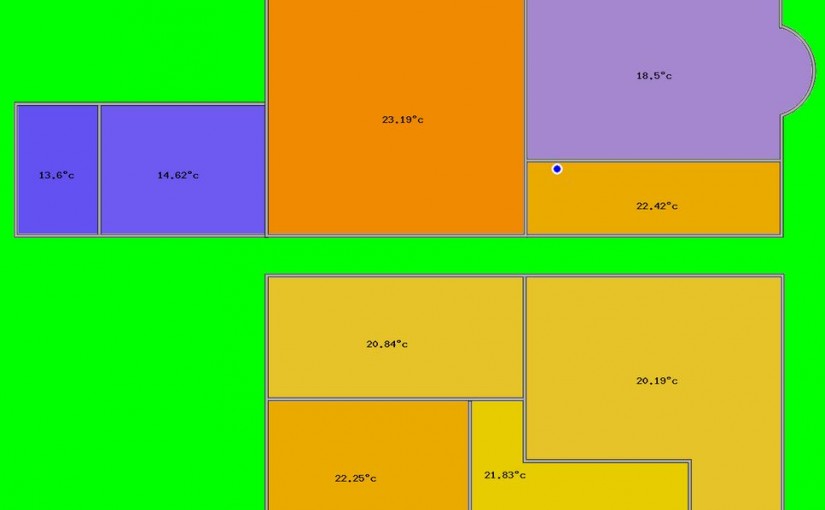 Not going to go into the technical stuff on this post, far too tired. but wanted to try posting up an image to see if I had to host elsewhere or if it just goes, and thought this would be a good try.

A few years back I decided I wanted to put some temperature sensors in the house as we just never seem to be able to get all the rooms at a decent temp at the same time. You can be boiling hot in the one and freezing in another. Not much has changed with that respect but I do have more of an idea of what’s going on day by day and longer term. It’s really quite interesting. As I posted yesterday about the Raspberry PI board, one of my many wishes was to somehow get an interface to take over control of the central heating. It should be pretty straight forward, the biggest downside I don’t want to be screamed at having no heating if the computer freezes so need to build in over-rides.
Anyways, that’s the grand plan but below is a simple image I knocked together a few years back that uses php to colour in each of the rooms and write the current temp 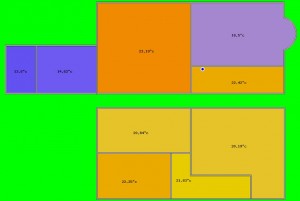 From inside my network you can click on each of the rooms to get some stats. and the little blue dot is the set point I’d programmed up for when I do sort out the controller.

Due to my bad coding at the time (first real time I’ve done php from scratch not just had to change someone elses code) and the fact that I keep everything (database is now at 860k entries) the detail page is quite slow to load. I should really rewrite it to store upto date stats elsewhere and then hourly just update that table with the totals. I may get around to it.
I did used to use MRTG to also connect into the database and pull the stats to have some nice graphs. This worked really well until I changed alot of my network kit that MRTG was polling, and I shut it down to give it a full clean up.

Anyway to get all this stuff going I use the OneWire Temp sensor DS18S20 I think it has a + on some of the chips I use but not all. I bought them online from a website with sheep in the title something like sheepwalk sheepcottage, can’t remember I’ll dig that out when I’m going through it a bit more. They were decent prices then maybe not now. but I received them very quick and they were helpful.

A thing to note that I’ll go into when I put the scripts up but this will prompt me, I do get alot of nulls coming back in the results. I know this is due to my mainly star configuration of the sensors and the fact that I dont provide power to the chips (bad idea when running a few). I did it because I was being lazy and using the 2 spare cables I had in the wire going to each of the alarm sensors for each room. It made sense at the time and it actually works really well as I didn’t have to run new cables and the temp sensor is hidden by the alarm sensor itself. Being close to the top of the ceiling I did expect it to skew the temp results (heat rises) but it actually seems to be pretty close when I compared them to an independent weather station sensor I used to see.

Oh and the green outside the house in the pic is also programmed to be changed. it’s green showing sensor fault (there isn’t one) I always planned to stick a sensor outside front and back and take an average reading for the colour. just havn’t got around to running a cable outside for that bit. So many things to do so much left unfinished 🙂

This website uses cookies to improve your experience while you navigate through the website. Out of these, the cookies that are categorized as necessary are stored on your browser as they are essential for the working of basic functionalities of the website. We also use third-party cookies that help us analyze and understand how you use this website. These cookies will be stored in your browser only with your consent. You also have the option to opt-out of these cookies. But opting out of some of these cookies may affect your browsing experience.
Necessary Always Enabled
Necessary cookies are absolutely essential for the website to function properly. This category only includes cookies that ensures basic functionalities and security features of the website. These cookies do not store any personal information.
Non-necessary
Any cookies that may not be particularly necessary for the website to function and is used specifically to collect user personal data via analytics, ads, other embedded contents are termed as non-necessary cookies. It is mandatory to procure user consent prior to running these cookies on your website.
SAVE & ACCEPT